Each of these paintings are unique, painted by hand and signed by the artist.

The Haitian painter Ernst Louizor was born on 16 October 1938 at Port-au-Prince in Haiti. His career as a Painter started  in 1951 when he joined the Centre d'Art and studied with Wilmino Domond. He focused on the perspective of drawing and composition.
He joined  the Academy of Fine Arts („Academie des Beaux-Arts“ ) immediately after its opening/inaugration in 1959, where he together with the renowned Haitian painter George Ramponeau delved into further study.

With his unique style, he preferred to implement Pastose spatula-technology and till today he has many  admirers including his wife and his brother Fritz Guerda Louizor Louizor, who have also adapted his style. Nowadays Ernst Louizor is known as the leading impressionist in Haiti. His paintings are included as reference in all major directories of Haitian paintings. Till today his Haitian paintings are displayed in several major exhibition and has achieved remarkable prices and moreover his paintings are auctioned in Europe and the United States.  Apart from this Louiszors has illustrated in the book of John Allen Franciscus, Haiti Voodoo Kingdom To Modern Riviera and Eva Patakis's book, Haitian Painting Art and Kitsch.

Alfred Mensa was born in 1980 in Labadi, Accra, Ghana. The self taught artist has already discovered his love of painting in the school and now developed his own style. He works mainly with acrylic on canvas and uses a spatula. With his spatula he gradually develops individual picture elements to form meaningful impressions. All major compositional elements such as shape, perspective, light and color find their natural space in his African paintings.

Although details are clearly sketched, Mansa's paintings move the viewer into a state of curiosity about the overall structure of the depicted situation, or what moved the artist in his work. Since his paintings are mostly action packed you will find them very exciting for a long time. Thematically his works deal with the people and places which Mensa knows best since early childhood, e.g. the work of the fishermen at Accra's beaches, the streets with hawkers, and also the traditional festivals of the Ghana. 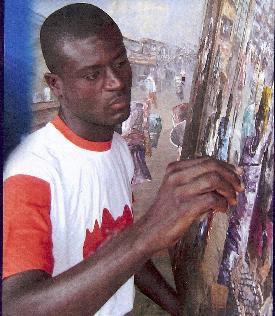 Mensa's pastose spatula technique bestows his pictures a big dynamic that attributes each character a lot of charisma, even in such activities, which are commonly referred to as simple and difficult. Thus the Ghanaian artist becomes the African ambassador of contemporary everyday African life to the world. As he adds an extraordinary amount of dignity to his paintings.

The renowned and famous Haitian painter Charles Du Franc was born on 10 October 1949 in Jeremie, Haiti. Early on his father taught him carving. After school he studied at the Academy of Fine Art in Haiti. Initially, he devoted himself to visual arts and from 1973 he was exclusively into paintings. Simultaneously, he also began to exhibit his Haitian paintings. Very soon his paintings reached to the Museum standard, and it is not surprising that one of his works is in the permanent collection of the international salon of naïve art in Paris. Charles Du Franc's works cover a wide repertoire of different subjects. Today he is ranked among one of the best Haitian landscape painter.

Distinctively, his forceful style is often mixed with fantastic element. His agile and often cubist compositions include both African and French influences as well as Christian and voodoo elements. He has exhibitions in the United States, the Caribbean, Venezuela, Canada Costa Rica, Germany and France (Paris). 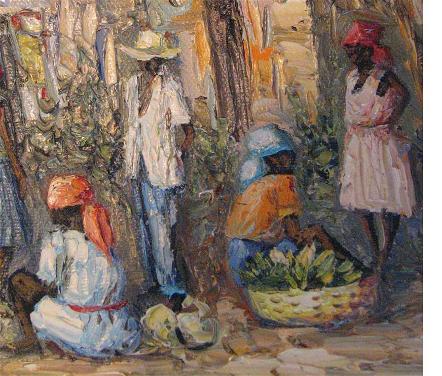 We are especially pleased that we could win the family LaFleur for a longtime partnership. In MyAfricanPainting you have direct access to African-inspired images from Haiti. The hand-painted images (acrylic on canvas, Oil on canvas) convey the typical Haitian sentiment. They combine great artistic mastery with authentic African and European elements. Besides the above described classic Haitian paintings from back in the 70th of the last century we also offer modern Haitian paintings such as the ones from Reginald LaFleur (aka Alaby) who is somewhat the protagonist of the family. 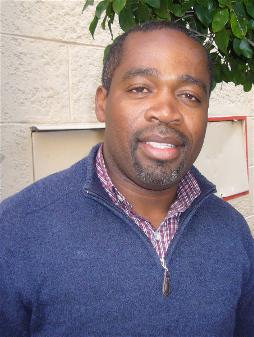 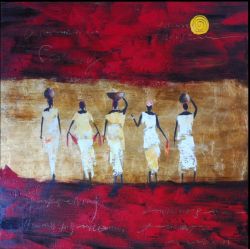 Ladies in Gold and Red 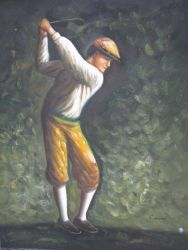 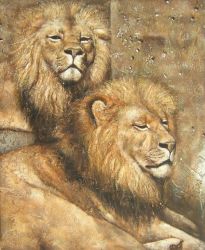 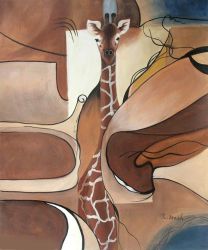 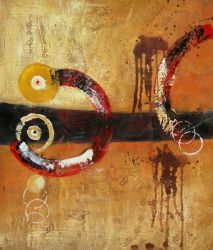 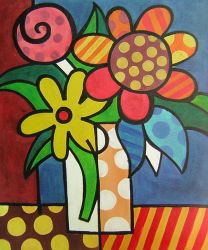 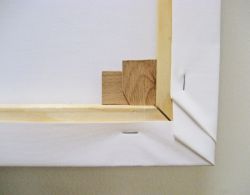 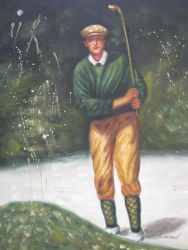 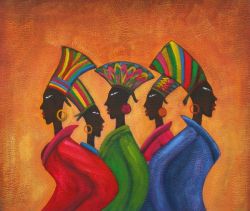